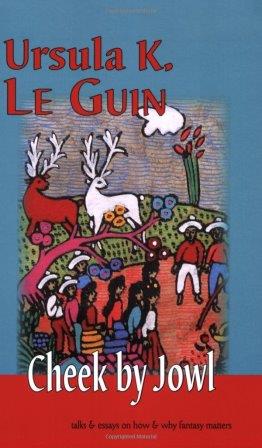 My love of animal stories fueled my doctoral research. One particular interest was learning more about ‘degrees of animalness’ in children’s books. This led me to Ursula Le Guin‘s unusual title, Cheek by Jowl.

Le Guin is well known for her Earthsea fantasy series. A Wizard of Earthsea fascinated me when I was younger, so I was keen to read Cheek by Jowl as well. The book was written in answer to a question Le Guin posed for herself: ‘Why do most children respond both to real animals and to stories about them…?’ [1]

To help answer her question, Le Guin sorted animal stories into a taxonomy of what she called ‘Critter Lit’. She placed stories on a spectrum, beginning with purely animal (all jowl) to purely human (all cheek). Realistic animal books such as Jack London’s White Fang (1906) sat at this jowl end. Stories where the animal characters are human stand-ins were placed at the cheek end. These animals might wear clothes or do human things. Australian examples of this cheek end could include books like Aaron Blabey’s Pig the Pug and The Bad Guys, Gus Gordon’s Wendy or one of my favourite Christmas stories, Wombat Divine by Mem Fox and illustrator Kerry Argent.

With the cheek end of Le Guin’s animalness taxonomy being the most anthropomorphic, Le Guin aimed to keep the mid-range for ‘the kind of book that might be seen as the typical animal story – tales of the relationship between human and animal. A boy and a dog. A girl and a horse’.[2] But that was tricky. Le Guin found that many jowl end animal biographies could also be placed in the mid-range. Books like Anna Sewell’s Black Beauty or Jack London’s White Fang.

Cheek by Jowl is a thought-provoking read for anyone interested in children’s literature and animalness. As I grappled with analysing different aspects of my own taxonomy of Australian titles (from 1851-2015), I took heart from Le Guin’s conclusion regarding her journey: ‘I did find some themes, some threads of guidance, but I can say now, I came out of the jungle of Critter Lit with a peacock’s feather and a tiger’s whisker and a white rabbit’s top hat, but with no answers at all.’[3]

If this esteemed researcher could find ‘no answers at all’, I knew my path to anthropomorphic insight would be a long and fascinating one, but as I delved into ways authors employ animal characters, I found that is also half the fun …